If you’ve been reading my blog for awhile, you know that I tried the Kat Von D liquid lipsticks before and I wasn’t a huge fan. Everyone I know though seems to LOVE them, so I decided to try them again when I saw them with a discount at TMSLA. My main issue with the original color I bought (Damned), was that it was SUPER patchy. Like there were spots on my lip that I could not cover and if I tried to put a second layer on, it would get SUPER sticky and crumble. It just wasn’t working for me. Well, I was hoping if I bought a more neutral color it wouldn’t be as patchy, or obvious if it was patchy. I decided to get 3 of the most popular colors they have – Bow & Arrow, Lolita, and Lolita 2.

I used my Paw Palette to keep the tubes from rolling. 😉

Do you see how patchy that is? It’s bizarre to me.

Now this time (because I wasn’t focused on trying to even it out), it wore VERY comfortably. I had no transfer (except when eating greasy foods), lightweight, and it lasted all day. Even though it was lighter and closer to my natural lip colors, it was still patchy on my lips. It wasn’t as obvious, but it was definitely patchy. 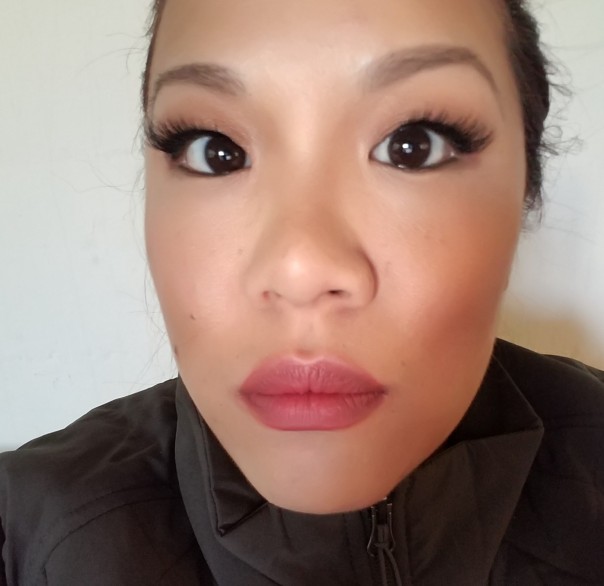 This is me wearing Lolita. I don’t know if you can tell, but the very center of my lips isn’t covered well (it was stained red from a lipstick I was wearing). That is the same spot on my lip that I can’t get an opaque coverage with these lipsticks. With Damned, I had way more and more obvious spots that weren’t opaque coverage.

At the end of the day, while I think the wearability of these lipsticks are AMAZING, I just don’t think I would buy them again. Just because they are $20 (which is more expensive than a lot of other brands), and I PERSONALLY can’t get the correct coverage on my lips. Now, do I think you shouldn’t try it? Not necessarily. I think you should try it, but buy it from a store that you can return to if you are not satisfied. Will I continue to wear these? Yes, but I will definitely be using a similar colored lip pencil underneath (a step I prefer to avoid).

Have you tried these formulas before? How do you like them, and how are you applying it?