I decided it would be fun to recreate Mirana’s look. This was the picture I was going off of: 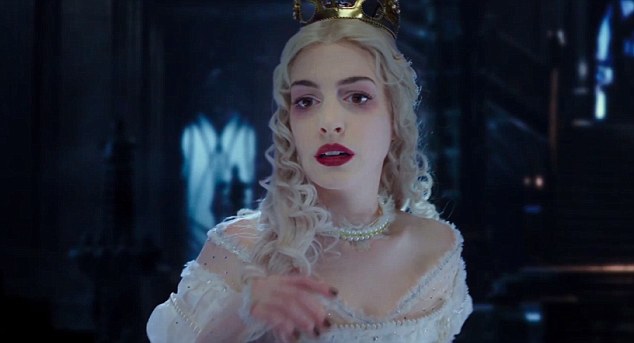 I swear my eyeshadow was more vibrant in real life, but my camera flash blew it out a little and I didn’t realize until I took my makeup off.

Here is what I used:

Naturally, I had to use the new UD palette.

Foundation – Since I don’t have any light foundations, I took my MUD Cosmetics Character/FX Palette #2 (which apparently is no longer available but here’s the replacement) and used the White mixed with UD Naked Skin Liquid foundation in 5 (the palest shade I own).

I used MAC Sculpt on my nose,  hollows of my cheeks, and jawline to give myself a little definition.

Eyes:
First I patted Lily (from the UD Alice Through the Looking Glass palette). From the same palette, I grabbed Reflection and applied it on the lid going up to towards the brow bone. To get the hollowness she has in her inner corners & under eyes, I used Mirror  (same palette) with a fluffy crease brush to create that depth. Then I used the Bdellium Tools BDHD 788 brush and grabbed some Makeup Geek Cherry Cola and applied it haphazardly around the outer parts of my eyes to give that reddish tone. Then with a smaller creases brush, I used Gone Mad (from the UD – ATLG) and deepened the center of my under eyes and the center of the hollow by the nose. With the same palette, I grabbed time with an angled liner brush to define my lower lash line.

Lashes: Red Cherry Lashes in 747 and applied it with the House of Lashes glue. I used a the Maybelline Lash Discovery at the base of my lashes to get them to blend with the fake lashes better.

8 thoughts on “Alice Through the Looking Glass Inspo – Mirana”