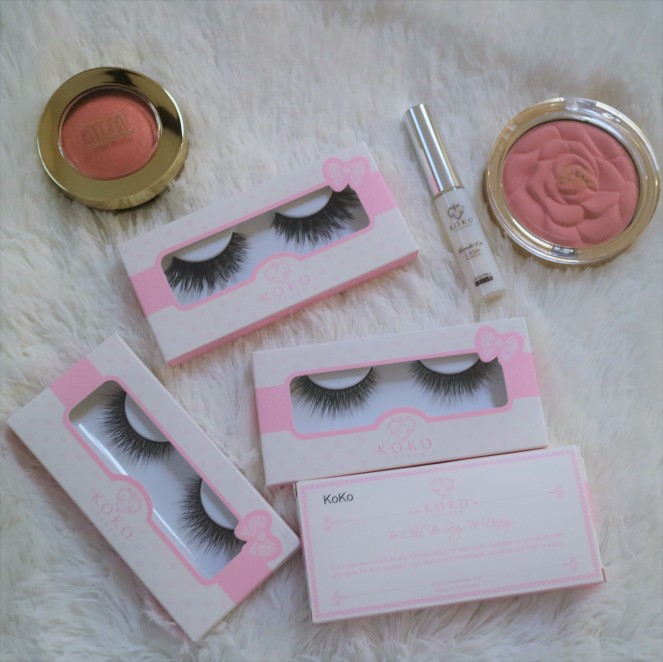 I recently ordered a few things from Lady Moss, because I really wanted a few more KoKo lashes and decided to get some Milani blushes because I realized they were cheaper on the website than they were at the CVS stores near me.

KoKo’s KoKo lashes are my favorite of their styles. It’s really pretty and natural looking and not overwhelming for my little Asian eyes. Here’s them on:

I also picked up a pair of the Koko Goddess lashes, because I’m determined to make these work. They’re so pretty and they look great on everyone else, but they’re a little intense on me (maybe because I’m not used to having full lashes). I’ll figure out how to trim them so they work on me though.

The only complaint I have about Koko lashes are that the band on the lashes are pretty thick. It takes a bit of getting used to, but I still think these are more comfortable than the HOL lash bands. I also got their lash glue and I haven’t tried it out yet, but I’m hoping it’s a happy in between the HOL lash glue and the DUO lash glue.

I was also really was excited to get some more Milano blushes because I have the Rose Powder Blush in Coral Cove & I really like it, but it goes for $13 at CVS and I honestly would rather get a name brand blush for that price point. Mostly because they don’t have a huge variety of colors and other brands tend to have better color range if it’s a brand that has a pro discount, it’s often cheaper for me. Anyway, at Lady Moss these are only $7.99 for the Rose Powder Blush and $8.99 for the Baked Blush. I definitely jump on that price point to grab the Rose Blush in Tea Rose & the Baked Blush in Luminoso.

Tea Rose (the swatch on the left) isn’t as vibrant as I looked on the site, but it’s still a really pretty dusty pink color that’s pretty flattering on those with medium to light skin tones.

Luminoso (on the right) is prettier than I thought it was going to be. I thought this was a lot lighter than is actually is and not as shimmery as I thought. (According to some people on the interwebs the color has changed from the original).

The KoKo lashes are $6.99 for the two styles I got, but they vary from style to style.

This post is not sponsored by Milani, KoKo Lashes, or LadyMoss.com and the links provided are not affiliate links.