Unless you’re having multiples or were told by your OB that your baby may have to spend time in the NICU, people don’t really ever expect their baby to end up there and therefore don’t’ really mentally prepare for it. Not that you can really mentally prepare for it. Baby Boy was considered a late -preterm baby, so automatically had to go to the NICU. Not only was he barely 34 weeks at birth, but he also was only measuring at 32 weeks which raised more issues of possibly being more underdeveloped than anticipated.

I was allowed to do skin to skin with my baby for maybe half an hour, but he did have to go to the NICU rather quickly so I couldn’t do the full hour and I couldn’t do the breastfeeding the first hour which was a bummer. I don’t know if it’s protocol at all hospitals, but dad (or another family member) escorts the baby to the NICU from the delivery room so there is no baby mix up. We are also given bands to have access to the baby whenever we want that also identifies us to the baby. BTW I LOVE our hospital. We picked them because their NICU is part of Rady’s Children Hospital which is ranked 5th in the nation for their NICU (JUST in case).

Week 1 – When I was in the hospital, it didn’t really bother me that my baby was in the NICU. When I first visited, the nurses and doctors all said he was doing extraordinarily well for a baby at 34wks and I knew it’s where he needed to be to learn the things he needed to thrive at home. Plus, I was only down the hall and could visit whenever I wanted to (and I did). It wasn’t until I was getting discharged and my baby wasn’t that it hit that I had to leave my baby at the hospital and go home. It honestly felt like the most awful feeling in the world and it was really hard for me because I’m typically a logical person and my emotions were not something I could reason away. Damn those postpartum hormones. For the next few days, I cried every morning when we would head to the hospital, and then cry every night on the way home. It got better because he made SO MUCH improvement that first week. When he first was admitted he needed sugars, a CPAP machine (only for a day), caffeine (to keep him alert enough to remember to breathe), bili-lights (for jaundice, and an ng tube for feedings. These are all normal preemie/NICU things. By the end of the first week, he was off everything except his ng tube, because he was still learning to eat orally. That first week was emotionally easier for me because every time we went in, there was another big improvement and he progressed really quickly. It was still exhausting because we live about 25 mins (via freeway) from the hospital, so between trying to pump every 3 hours (btw if you have a baby in the NICU the hospital will provide a pump for you if you want to pump bedside), and making sure to be at his 8am & 8PM feedings (so I could bring milk for him for the next shift), but also trying to get the house set up and buy all the things we still needed (and trying to rest, since pumping every 3 hours in the night is a killer) I was pretty drained all the time. FULL DISCLOSURE: My parents were in town for most of the time and cooked and helped clean and set up the house for us, so I am EXTREMELY grateful because I know that’s not a luxury everyone has and it helped tremendously with hubs and I getting in naps. 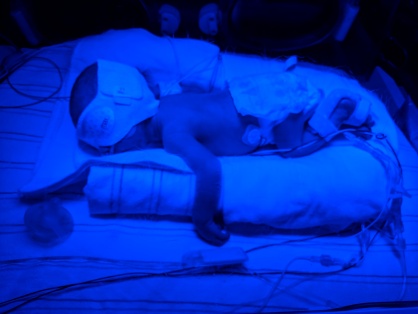 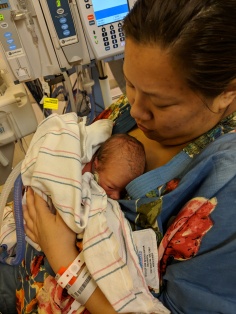 Week 2 – Running back and forth from the NICU was significantly harder. It was also emotionally harder for me. He was still progressing, but the feeding is the longest and slowest part of getting out of the NICU. It’s very much a 2 steps forward, 1 step back process. He was starting to take a larger volume which is good, but then would tire out quicker and not orally finish his feedings so the rest had to be gavaged through the tube. he would have some really good day of taking the majority of his bottle and then the next few feedings he would barely take any. Then just as he would get used to taking most of it, he would gain enough weight to need his feedings to be upped and it would start all over again. It was extremely frustrating not knowing how long it would take him to get a hang of oral feedings because every baby is different. Some get it right away and others like to take their time and since that’s the case most doctors and nurses won’t even give you an estimated date of release. This also happened to be my birthday, and the thought of not having my baby at home with me on my birthday killed me. I cried at the hospital the night before and was struggling to leave. I felt bad because the nurses felt bad for me because I literally could not stop the tears from flowing and they knew it was hard for parents who have babies in the NICU, but up until then I had been happy and optimistic so I’m sure seeing me meltdown was a shock. On my actual birthday, hubs kept asking what I wanted and if I wanted to do something and I just kept saying I just want to be with my baby. We went to lunch with my parents and I was miserable the whole time because I just wanted to be at the hospital but I knew I had to eat something. All day the “Happy Birthday” texts and messages just made me even more sad. I knew it was ridiculous and people were just being nice and kind, but it just reminded me that it was my birthday and I didn’t have my baby at home with me. After my birthday things started to pick up. He was eating a lot better, like 75 – 80% of his feedings for a few days, so they switched him to an over the counter milk fortifier (he was drinking milk with a fortifier for extra calories) in preparation for going home. THAT was not pretty. He did not like the new fortifier and basically refused to drink it. He was back down to only taking MAYBE 50% of his feedings (more like 40%). After a couple of days of trying it, we asked the doctor if we could PLEASE switch to a different brand of fortifier. She agreed when the nurse (who has had him several times before) even vouched that it was abnormal the way he was feeding and it was probably because he didn’t like the taste. After we switched him, he started taking his full feedings orally. He even pulled out his own ng tube and was like ‘I’m done with this, here you go’. After the tube came out, he did have one off feeding, but because we didn’t want to the tube to go back in, the nurse asked the doctor if we could switch to shift feeds (where he has to eat x amount in a 12hr frame vs x amount every feed) and they okayed it. After that, he was eating like a CHAMP (even eating more than he needed to), so one of the nurses (who wasn’t his nurse that day, but had had him several times before) told us to bring up our car seat and just leave it at the hospital just in case the night nurses wanted to do his car seat test. This was a Sat night, but the doctor during the day had told us he wanted to check the baby’s bilirubin levels on Monday, so we assumed he wasn’t going home until early next week anyway. 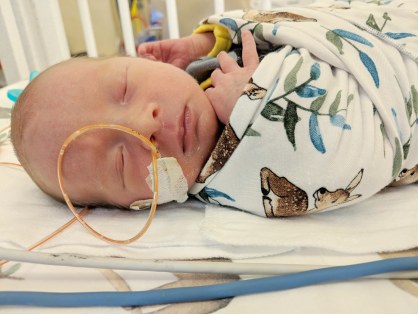 Week 3 – I walked into the NICU Sunday morning and the night shift nurses were all hugging me and saying congratulations and I was standing there totally confused. The new day shift nurse (I say new because while we’ve seen her in the NICU before, she hadn’t been assigned to our baby until that day), came over and was like “So you look really confused. They did the car seat test last night, as well as checked his bilirubin levels, and ran his hearing tests and he passed everything which usually means they get to go home. We haven’t heard from the doctor yet, so I can’t say for sure, but it’s looking good.” I almost burst into tears of joy in that moment. The night shift nurse was getting ready to leave and she came over and said “After you guys left last night, I called the doctor and was bugging him to let me do everything a day early. He better let you guys go home today.” Then she had a hard time leaving him (she was his primary nurse at night, we had one other one the majority of the time she wasn’t there). After she left the doctor came in and he came out and said “Well, I was trying to find an excuse to keep him here because everyone loves him so much, but he’s looking great and you guys can take him home today. I’ll get the paperwork going.” Literally the best day ever.

I want to thank all the nurses and all the doctors at the Rady’s Murrieta NICU. They were soo amazing not only to my little man, but to hubs and I. They gave us great advice on how to take care of him, were extremely supportive (it was like having another family), and really made us feel like they were really invested in our baby. The doctors always came over to greet us, update us and ask if we had questions. It was just a very reassuring experience.

Hopefully, this advice helps someone out there! Having a baby in the NICU is hard, but know you are NOT alone and if you need to talk to someone, there are LOTS of support forums and groups you can join. Some NICU’s even have their own group you can join to get support from parents who had babies in that specific NICU and they know the doctors, nurses, and routine well and can give great advice that’s more specific to your situation.

2 thoughts on “Mommy Life: NICU Story, What to Expect, and Tips on Surviving”